After a rigorous judging process, a panel that included retired astronaut Nicole Stott selected two winners from the Future Engineers Think Outside the Box Challenge. NASA and the American Society of Mechanical Engineers (ASME) Foundation issued this national design challenge to K-12 students in April 2016 to celebrate the launch of the Bigelow Expandable Activity Module (BEAM), the first expandable habitat deployed on the space station. 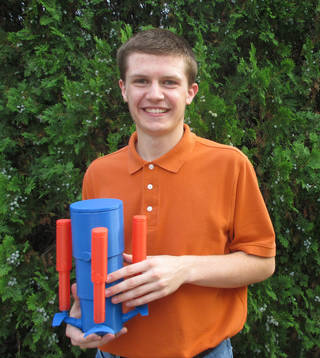 One national winner from each age division was selected from a total of 122 submitted designs from 26 states. The winner from the Teen Group (ages 13-19) is the Expanding Pod designed by Thomas Salverson, a Gretna, Nebraska native and currently a freshman at the University of Alabama in Huntsville. The winner of the Junior Group (ages 5-12) is the Space Anchor designed by Emily Takara of Cupertino, California. These students will receive a grand-prize trip to Las Vegas, Nevada for a tour ofBigelow Aerospace – the space technology company that developed BEAM under contract with NASA. 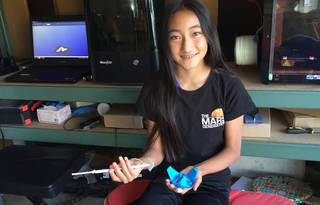 Space exploration often requires scientists and engineers to accomplish more with less. Smaller and more compact payloads help NASA make the best use of limited cargo space for missions, while sustainable technologies are needed to reduce, reuse and recycle crew supplies and mission support materials brought from Earth. Expandable habitats require minimal payload volume on a rocket because they expand after being deployed in space to provide a comfortable area for astronauts to live and work. BEAM is a structure made up of layers of advanced softgoods that was delivered to the space station during the eighth SpaceX Commercial Resupply Service mission. Once installed, BEAM nearly doubled in length and increased by 40 percent in diameter. This two-year BEAM technology demonstration on the space station will test and validate the expandable habitat technology that might be key to the journey to Mars and other deep space missions.

Building on the process for the design and packaging of BEAM, The Think Outside the Box Challenge asked students to imagine new concepts that will enable the missions of tomorrow. Participants designed 3-D printable objects that assemble or expand beyond the printing bounds of the 3-D printer located on the space station. The ultimate goal of the challenge is to create something useful for astronauts living in microgravity.

Salverson’s Expanding Pod is a set of containers intended for astronauts to store small items on the International Space Station. His design is comprised of multiple cylinders that slide and twist to create five sealed stowage compartments that lock into place.

“I enjoyed the difficulty of this challenge since it made me think in terms of “expanding” an object, which was something I had never considered before when 3D printing. It took me many prototypes before I had successfully made my completed design.”

While researching some of the challenges that astronauts face while working in space, Emily Takara discovered that astronauts sometimes have trouble moving easily in large, open spaces. That led Emily to design the Space Anchor, an extendable arm and grabber set that prevents astronauts from getting stuck while floating in microgravity.

The Challenge semifinalists and finalists from each age group are:
Teen Semifinalists (Ages 13-19):

The Future Engineers Think Outside the Box Challenge is the fourth in a series of space innovation challenges developed by the ASME Foundation with technical assistance from NASA. The series is designed to extend the reach of NASA’s in-space manufacturing research by inspiring and involving the next generation of scientists and engineers with 3-D printing technology, space exploration, and digital design. Previous Future Engineers challenges have called upon students to design 3-D models of space tools, containers, and objects needed for the next era of space human exploration. The next challenge launches in October 2016.