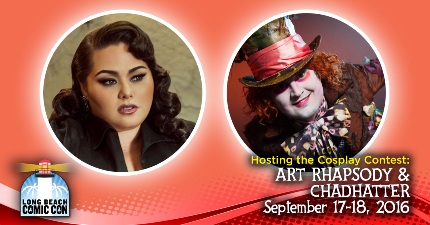 One of the Most Celebrated Events of Long Beach Comic Con Returns
on September 17!Just over a month before the doors open to the seventh annual Long Beach Comic Con,MAD Event Entertainment is pleased to announce registration is now open for this year’s Cosplay Contest!Hosted by cosplayers Art Rhapsody & ChadHatter, this year’s contest takes place on Saturday 9/17 at 7:00pm in Room S7 in the Long Beach Convention Center.”Cosplay has always been one of the most celebrated parts of the show,” says Executive Director and Co-Founder, Martha Donato. “It is very important that our show be friendly to cosplay in every aspect, on and off the show floor, with programming and events geared toward cosplayers from beginners to professionals. Our annual cosplay contest has grown into one of the highlights of the show, and it is always exciting to see the passion that goes into all of the costumes of our participants.”

Awards will be given for: Best Hero, Best Villain, Best Youth, Best Group, Funniest, Best Tv/Movie, Best Sci-Fi/Fantasy, Judges’ Choice, and of course, Best in Show. Judges will be scoring for overall difficulty, creativity, accuracy(for recreation), and showmanship/character. Look for further announcements on prizing in the coming weeks!

All participants must register in advance, and complete rules and registration info can be found here! 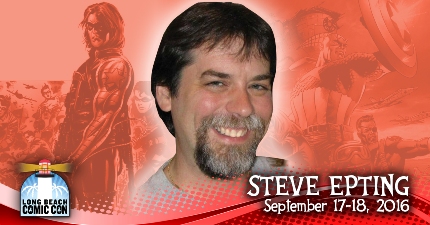 Hello fans & friends, yes, it’s hard to believe that as of this posting the 2016 LBCC is just a month and two weeks away. We are still hard at work putting all the finishing touches on this year’s con and can’t wait to spend the weekend with you all.

On the cosplay side we are very happy to welcome Vegas Power Girl back to Cosplay Corner, and excited to have Maid of Might & Hendo Art making their first appearance at LBCC.

And we have A LOT more coming, so be sure to stay tuned here and on our social media for the latest updates! 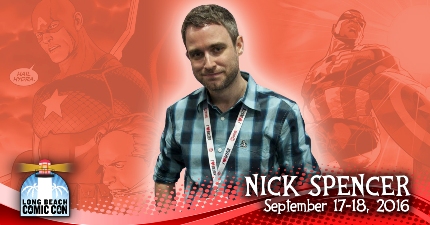 Nick Spencer and Joe Eisma Celebrate 50 Issues Together in Long Beach This September!

In addition to his long running original series at Image, Nick Spencer is recently known for his Captain America: Steve Rogers series, which has had fans and critics alike talking for months. Spencer has also previously worked on multiple titles at DC and Marvel respectively, and is the creator of Bedlam and Thief of Thieves at Image.

Spencer and Eisma will appear throughout the weekend, and together on the Image Comics panel on Saturday September 17 at 2 pm! 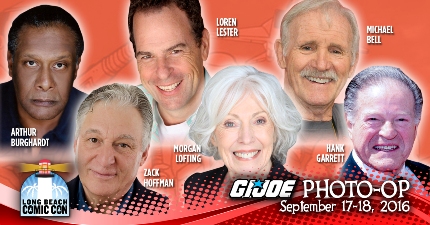 Now it’s getting even better! We are thrilled to announce the addition of Zack Hoffmanthe voice of Zartan!

The JOE’s will be appearing in our Animation Island all weekend, as well as, panels on Saturday & Sunday.

In addition to meeting and signing autographs for the fans all weekend we are happy to offer a once in a lifetime photo opportunity with all six of our G.I.JOE guests. A professional photo with six heroes and villains from the classic TV show. A must have for any hardcore G.I. JOE fan!

Epic Photo-Ops, the convention photo pros, will be on hand all weekend to capture the moment and print it up for you on site! You can get a digital copy too! Bring your friends for the ultimate group photo!

Make a memory. Get the pic. For more info Click Here. 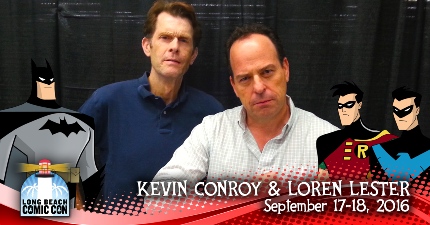 Kevin Conroy and Loren Lester to Appear Together in Long Beach This September!

Appearing as the voices of Batman and Robin in the celebrated 1990’s television series,Batman: The Animated Series, the two will appear at the LBCC for the first time together in a series of signings and a special Saturday panel, looking back at the series that remains a high watermark in animation nearly 25 years later!

Kevin Conroy holds the honor of having played Batman longer than any other actor in either live-action or animation. In addition to being credited for his two distinct voices for Bruce Wayne and Batman in Batman: The Animated Series, Conroy has voiced the character in the direct-to-video DC Universe Animated Original Movies: Batman: Gotham Knight (2008), Superman/Batman: Public Enemies (2009), Superman/Batman: Apocalypse (2010), Justice League: Doom (2012),Justice League: The Flashpoint Paradox (2013) and Batman: Assault on Arkham (2014). He returned to the role again for the 2015 Rocksteady Studios game, Batman: Arkham Knight.

“Looking forward to the chance to reflect on my work for Batman The Animated Series, as we approach the 25th anniversary of the landmark series at the Long Beach Comic Con” said Kevin Conroy.

Loren Lester appeared alongside Conroy in the landmark animated television series as Dick Grayson, better known as Robin, and as Kirk Langstrom (Man Bat) in Batman: Arkham Knight. He has also appeared as the voice of Hal Jordan (Green Lantern) in the DC Entertainment series, Batman: The Brave and the Bold, and as Iron Fist in Marvel’s The Avengers: Earth’s Mightiest Heroes and Ultimate Marvel vs. Capcom 3. Additionally, Lester has appeared in over 200 episodes of television including the cult favorite Star Trek: Deep Space Nine.

“This will only be the second time ever that Batman & Robin are at the same convention” notes Loren Lester. “I’m thrilled to be returning to see all my fans in Long Beach”

Conroy and Lester will appear throughout the weekend, and will revisit their roles as The Dark Knight and Boy Wonder on a special panel presentation of Batman: The Animated Series on Saturday September 17, in celebration of DC Entertainment’s recently announced Batman Day.

Ticket prices will go up at the end of June, so don’t miss your chance to save! 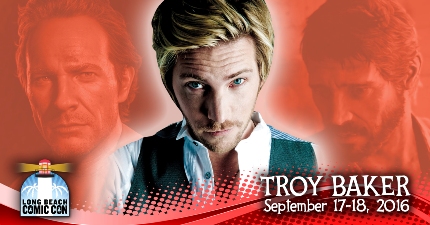 Awesome news for animation and video game fans! Voice and Motion Capture ActorTroy Baker will be appearing at the 2016 Long Beach Comic Con – September 17 & 18at the Long Beach Convention Center!

A prolific voice and motion capture actor, Troy is best known to video game fans as Joel in the hit game The Last of Us and most recently as Samuel Drake in Uncharted 4: A Thief’s End.

In addition to his long list of video game credits, he also keeps very busy in the animation world. Troy has voiced characters on some of your favorite shows includingAvengers Assemble, Marvel’s Guardians of the Galaxy, Transformers: Robots in Disguise, Ultimate Spider-Man and many, many more.

Troy will be appearing in our Animation Island and will be available for autographs, photos and video. He will also appear on some awesome panels for fans to hear more about the world of video games and animation.

Ticket prices will go up at the end of June, so don’t miss your chance to save!